When Shane first came to us at CoAct / Community Solutions in Mackay, he was quiet and reserved. He’d put up some big walls around himself and didn’t trust anyone. Shane had trodden a tough path in life – abandonment, homelessness, his father dying very soon after they met and a leukaemia diagnosis.

How we built trust

Shane’s Recruitment Partner, Linda, shared a lot about her personal journey with him. She’d been on a similar journey – also registering with an employment service provider that had given her very little support. Like Shane, Linda had lost faith in the system, and herself.

Linda set some clear goals with Shane, talking early on in their relationship about what the end looked like. What were they working towards? What did a good result look like? 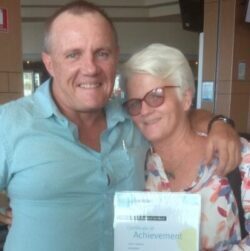 The support we offered

Shane had a lot of negative self-talk. His life seemed riddled with bad luck and he found it hard to see how this could change. People close to him reinforced that sense of hopelessness too, telling him they thought he’d never make it.

We spent a lot of time helping him learn how to focus on the positive. A big part of this was to work out what his passions and goals were. We found out that he loves working with people, especially those with disability, and he’s very good at it.

We also helped him manage his anger. In challenging situations, it could spiral out of control. He worked with us to bring out his best self – believing in himself, in control of his anger and clear of drugs too.

Shane started a Certificate III in Individual Support, but struggled to fit in. He felt different from the others on his course – in his words ‘an outcast’. He also felt his teachers didn’t think he had much to offer. With our support and coaching, he started to think better of himself and how he was seen by others.

He even managed to turn things around and complete the course!

We worked together building his self-esteem, confidence and skills for around six months before Shane found his current role – a paid placement which he loves. His customers think the world of him too! Within a few weeks, his hours increased and now he’s an essential part of the disability support workers’ team.

Saving for the good things in life

Shane started work in October and started saving straight away. We researched banks with him to make sure he opened an account without any fees. The first thing he’s bought is a watch, and now he’s putting money aside for a car. After that, he’s planning on saving up for a deposit on a house! He’s so motivated.

He’s focused on being a new person now and has learnt to see who he really is – a caring and supportive man with a lot to offer. His lived experience gives him skills that other support workers don’t have. The biggest skill is genuine empathy.

Linda says; “I shared a meme I love with Shane at the height of his challenges – When people throw rocks, build a tower.”

“He’s managed to do this and build a solid life for himself. His future looks very bright.”

If you’d like one of our team to give you a call to talk through whether the Disability Employment Services (DES) program is right for you, register here.

We can help you navigate the world of work with the latest job search tips, news and updates direct to your inbox.
Real stories: Disability
McDonald's just got lucky
Four of our customers have joined McDonald's thanks to determination, hard work and phenom...
Learn More
How can CoAct help me?
Build confidence, develop...
Natasha was in a vulnerable place when she first registered with CoAct / Community Solutio...
Learn More
All articles
Lucas grows a new mindset
Lucas hadn’t left home in 5 years when he reached out to CoAct / Youth Projects. He was ...
Learn More