Thanks to the Can Van, Tannille realises she CAN

Tannille had been unemployed for over three years when she approached CoAct partner Workways for help. With Tannille’s motivated approach, and a little help from Workways, she soon found her way.

When Tannille first came to CoAct partner Workways for help, she had been unemployed for over three years. She was dedicated to the job hunt and determined not to give up, but had been finding it difficult to get the attention of employers. Tannille had been applying for jobs every day and had even started applying for positions she wasn’t qualified for because she was willing to try anything to get hired.

Taking a first step with the Can Van

Impressed with her determination, the team at Workways signed her up for a barista course, and when she completed the course they put her to work in the Can Van. Working in the Can Van gave Tannille some work experience, boosted her confidence and helped her make some valuable connections along the way.

Christine at Pippi’s on the Beach in Mission Beach reached out to Tannille for an interview. During the interview Tannille disclosed that she had a disability, and Christine was so impressed with her honesty that she agreed to give Tannille a work trial. 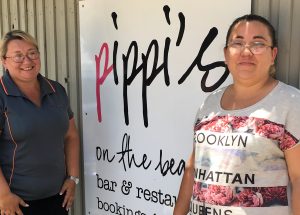 Tannille did such a great job during her work trial that she immediately transitioned into a paid position at Pippi’s. She has been there now for three months and is very much enjoying the work. Christine is thrilled with Tannille’s work ethic and loves having her as part of their team. When asked about Tannille’s journey into paid employment the Workways team said:

“Tannille’s success is completely due to her resilience, no matter how many unsuccessful replies she received she just kept applying for positions. She never gave up and her hard work paid off”.

Ready to take your first step into paid employment?

Contact the friendly team at CoAct today to find out how we can help.

We can help you navigate the world of work with the latest job search tips, news and updates direct to your inbox each month.

Can Vans
'Can Van' offers job seek...
THE Can Van rolled into Gladstone yesterday, bringing with it free coffee and cold drinks ...
Learn More
Can Vans
Can Van roadshow visiting...
CoAct, a provider of employment services for job seekers with disability, along with disab...
Learn More
Can Vans
On the road to success wi...
Meet two of our hard working Can Van baristas, Leanne and Rebecca!
Learn More